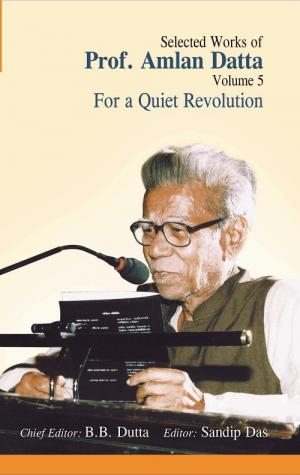 The writing of Prof. Amlan Datta deserve serious attention of students, teachers, researchers and intellectuals alike given his status as an economist amongst philosophers and a philosopher amongst economicsts. His time tested thoughts will surely inspire the coming generation  and shape their lives in the individual, socio-economic and political spheres. With this conviction serving as our inspiration, we  present this compilation of his works as a tribute to this prophet of democracy-led development.

Prof. Amlan Datta was a many sided genius. He was an outstanding economist, a legendary teacher and an independent thinker with an intellectual philosophy that guided him to fields of study other than economics. In his long and productive career, he displayed remarkable consistency without being swayed by the waves of ideas, ideologies and events that influenced the social psyche of the day. Displaying great personal courage and an unflinching loyalty to truth, he lived the values he cherished-making him a man far larger than a mere intellectual. Such a man belongs not only to the present but becomes indisputably a precursor of what lies in the womb of the future. Though he found proximity to the ideas of the great scholars of his time, he continuously struggled to create something new that could address the ills of the day. As an economist, he took a great interest in history of economic thought and development economics for the obvious reasons that they not only relate to productivity and growth but also to distributive justice and the intimate relationship between man and his environment.

Dr. B.B. Dutta is an economist, student of Amlan Datta and former Member of Parliament(Rajyasabha)

Sandip Das taught philosophy and presently the visiting professor of the institute of Gandhin Studies at Wardha.

"I have read the first half of your book with pleasure and agreement and hope to finish it soon. It takes more time than one would expect from its size. If you believe that I could do something to facilitate publication in other countries or draw attention to it in your own country, do not hesitate to let me know. With the expression of my appreciation and thanks."

To Amlan Datta, on reading his book: "For Democracy"1953